"The feeling of fostering a unity amongst the Indian section of the tea planters was very acute in the decades before 1920. The problem of finance, sale and transport threatened the very existence of the Indian planters" --- wrote late Prasanna Kumar Barooah of Jorhat, recollecting the plantation of the Assam Tea Planters' Association's seed at Jorhat as early as in 1921 by no less a person than Deshabhakta Tarun Ram Phookan, then a practicing barrister and a former member of the Assam Legislative Council. 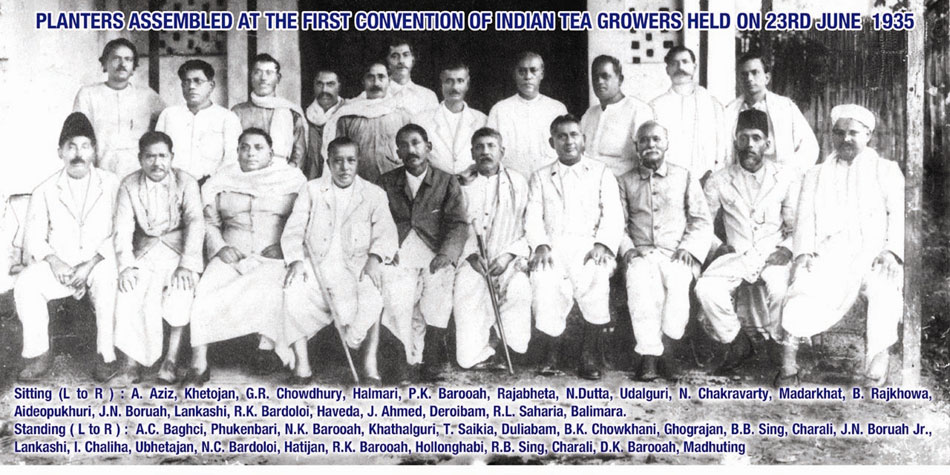 Prasanna Kumar Barooah recorded --- 'A meeting of the Indian planters at the initiative of late Deshabhakta Tarun Ram Phookan was held at Jorhat in the year 1921 and a small body was formed with me and Sri Kanak Dutta Saikia as Secretary and Assistant Secretary respectively. However, all our dreams and aspirations materialized only when we could find a genius like late Karmabir Nabin Chandra Bardaloi of loving memory, who left no stone unturned to put the organization on a sound footing in 1936".

To establish the organisation 22 Indian planters assembled at the Amolapatty Namghat, Dibrugarh, on 23rd June, 1935 at a meeting presided over by Benudhar Rajkhowa. A committee was formed at the meeting with Prasanna Kumar Barooah of Dibrugarh as Chairman, Rajani Kanta Baruah as Secretary, Rameswar Sahariya as Treasurer, Jogendra Nath Barooah as Assistant Secretary and Karmabir Nabin Chandra Bardaloi as a member. As per decision of this committee the first general meeting of the "Assam Valley Indian Planters Association" was held at Dibrugarh on 28th October, 1936. This year is now considered as the date of birth of our organisation, known today as the Assam Tea Planters' Association or in short ATPA.

Kamakhya Ram Barooah of Guwahati presided over the 1936 meeting. At that time the Association had 79 Tea gardens as members. The meeting was attended by 48 members from different parts of the Brahmaputra Valley. Prasanna Kumar Barooah was the Chairman of the Reception Committee.

In his presidential address at the memorable meeting Prasanna Kumar Barooah declared --- "It was through the exertion and initiative of late Nabin Chandra Bardaloi that this Association was launched into being in June 1935 here at Dibrugarh. Since then there was a fair response of enrolment of members but the general meeting had to be differed from time to time for one reason or other, but in the mean time it was functioning as best as it could".

Then the first Chairman of the Association announced --- "One glaring instance of its achievements was than by its persevering and insisting efforts it could secure the right to nominate a member in the panel of the Tea Cess Committee, which gentlemen, I dare say you will all rejoice to think as its first achievement".

Deshneta Kuladhar Chaliha proposed at the meeting that the Association be named as "The Assam Valley Indian Tea Planters Association" (the word 'tea' was omitted earlier) and it be registered under Section 2 of the Act XXI of 1860. He also proposed that the rules formed by the Secretary be provisionally accepted. The meeting decided that the existing Executive Committee would continue and co-op the following members --- Someswar Baruah of Tinsukia, Jadav Prasad Chaliha of Sibsagar, Tafazal Hussain Hazarika of Titabar and Kuladhar Chaliha of Jorhat.

Dibrugarh remained as the headquarters of the Association for four years. In 1941 Mahendra Nath Barooah of Golaghat as the newly-elected Secretary shifted the office to one of his cottages at Golaghat, where the headquarters remained for nine years. Since opening of the office at Golaghat enrolment of members increased steadily due to yeoman services rendered by Mahendra Nath Barooah. Some leading pro-British Indian planters who kept themselves aloof from the Association at the initial stage, due probably to interests taken in the organisation by a number of Nationalist leaders, slowly began to enroll as members. In the mean time the Association was also recognized by the Governments --- both State and the Central. When India was partitioned in 1947 and the Sylhet district was cut off from Assam, the name of the organisation was changed again from "The Assam Valley Tea Planters' Association" to the present name "The Assam Tea Planters' Association" to cover the whole State, including Cachar district of the Barak Valley ; not just the Brahmaputra Valley as covered earlier.

When it was found impossible for Mahendra Nath Barooah to manage all the increased work by himself as the Honorary Secretary, the Association decided to appoint a full time paid Secretary in 1949.--- two years after the organisation began to represent the whole of Assam. When Rai Bahadur Heramba Prasad Barooah was elected Chairman in 1950 the headquarters were shifted from Golaghat to Jorhat and the office was located at the Jorhat Club premises for some time on a nominal rent. The Association tried to have an office building of its own since 1954. The Government was approached to allot a vacant plot of land at Jorhat for the purpose but no suitable plot could be obtained. The Association then purchased a plot of land at the well known residential area of Jorhat, known as Tarajan. Rai Saheb H.B. Kanoi of Dibrugarh donated the cost for construction of the present head office, named Kanoi Buildings, after the name of the donor. This permanent headquarters building was formally opened in January, 1961.

An Association, however, continues by its actions and achievements and not by its external look and resources. One of the land-marks of our association was the award given by Justice Ram Labhaya, Presiding Officer, Industrial Tribunal, Assam, on 13th August 1959. A dispute arose in 1950s when Assam Chah Karmachari Sangha demanded the same scale of salary paid by bigger tea plantations to clerical and supervisory staff for all tea gardens of the Brahmaputra Valley ; irrespective of their sizes and production. As most of the member gardens of our Association were less than 300 acres we pleaded for different scales of pay for different categories of gardens based on their sizes. After 26 months the award was given in our favour, fixing different scales of pay for three categories of plantations --- gardens above 300 acres, gardens between 150 to 300 acres and those below 150 acres.

On completion of 25 years we celebrated the silver jubilee of the Association in 1961-62 with due solemnity. Sri Morarji Desai, the then Finance Minister, Government of India, graced the occasion as the Chief Guest. The celebrations were presided over by Sri N.K.Dutta. It pains me, however, to mention that the Executive Committee of the Association could not function for sometime in the past due to certain injunction issued by the Assam High Court. Otherwise, our track-records of the past 50 years were quite eventful.

The Association felt the need of a combined body of all the tea associations of the country, including those of South-India and this opinion had been recorded in minutes of our meetings since 1946. The present Consultative Committee of Plantation Associations (CCPA) comprising of all plantation associations of North and South India is fulfilling the expectations of our members.

The Assam Tea Planters' Association may be called a regional organisation within the wider limit of the country. It is not a parochial association. Nor it represents only tea estates of small holdings. Whoever wants to identify with this region and the objects of the Association will be welcome to its fold.

Existence of tea in Assam (petroleum as well) tempted the British to conquer the region and develop the Indian tea Industry from its infancy. They were very clever businessmen. Inspite of their imperialistic outlook they knew how to keep good relations with the neighbouring people inhabiting around their tea estates. They also made friendship with local aristocrats and nobles. Maniram Dewan, the first Indian tea planter, who had been credited for discovery of tea in Assam as well by Samuel Baildon in his book "Tea in Assam", was very friendly with both the Bruce brothers, whom the world recognizes as discoverers of tea in India. Before opening his two tea gardens Maniram Dewan served the first joint stock tea company of India, Assam Company, for six years as a land agent. Later on, of course, Maniram Dewan faced many obstacles created by the British planters and their rulers in opening his tea gardens. Finally he was hanged to death as a freedom fighter in 1858 for his role in the Sepoy Mutiny. His execution served as a lesson to the other local tea planters. They learnt that they could not go against the rulers if they wanted to succeed in tea plantation.

The things, however, changed slightly in the 20th century, when the Nationalist leaders like Deshabhakta Phookan, Karmabir Bardaloi, Deshneta Chaliha and many others came forward to help and organise the local planters. Although the Nationalist movement took violent turns from time to time, even the British tea companies and their estates did not suffer much. These Nationalist leaders were very popular among the villagers living around the tea estates and the agitators were urged by the leaders not to damage or sabotage the plantations. The public leaders, some of them tea planters, knew the value of public relations around the industries, which, some of our present-day modern planters and plantation companies are overlooking in their zeal for increase production, sale and profit.

Lest we Forget the contribution of the local planters in socio-economic development of the region have been recognized by all enlightened Governments and well-informed citizens. The role of the local planters in development of education, art, culture etc. of the region deserves more and wider publicity to prove that our industry is not motivated by profit alone. Contributions of Jyoti Prasad Agarwala, Parbati Prasad Baruva, Rohini Kumar Baruah in producing Assamese films, literature, songs, dramas etc. are well-known in this State but many remember that they were also tea planters. Many schools, colleges, clubs, hospitals, libraries, temples etc. have been opened by the local planters in different parts of the State. J.B. College of Jorhat, founded on a plot of land and a house donated by a local tea planter family,commemorates the name of the first graduate tea planter Jagannath Barooah. The Medical College of Dibrugarh is situated on land of the Jalan family. To name only a few - Kanoi College, Chandra Kamala Bezboruah College, Devicharan Baruah Girl's College, Dr. J.K.Saikia Homeo College, N.N.Saikia College, Debraj Roy College, Jogananda Deva Goswami College, Handique Girl's College - are all established by donations of the local planters. Bisturam Barooah Hall, Bisturam Barooah Hospital, Dandiram Bardoloi Child Welfare Centre, Bhagawati Prasad Baruva Hall, Lakhiram Barooah Hall, Chandrakanta Handique Hall, Kali Prasad Chaliha Memorial Hall, to name again a few only - are all results of the local planters' generosity and philanthropy.

All progressive tea planters are aware of their duties towards the region of their operations and the Country. Right implies duties. We cannot claim our right to progress in our trade without performing our rightful duties. The responsibility of thousands of the workers and their families lies with us. As they are increasingly becoming conscious of their rights, they are also expected to be aware of their duties. In the same way the Government has the right to tax us, as well as some duties for our progress and success. The Assam Tea Planters' Association, completing 50 years of its humble but useful life this year, looks forward to better productivity and industrial peace in the years to come.